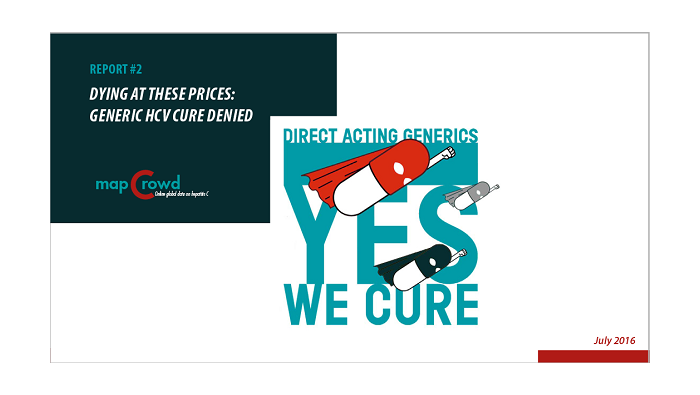 Hepatitis C Virus (HCV) elimination never seemed so close, yet the road ahead is precarious for the 80 million chronically infected people worldwide. The HCV deaths-related toll approximately 700,000 persons every year. Effective national elimination policies and programs need monitoring and surveillance. However, accurate and meaningful data is too often unavailable.

In late 2013, new direct-acting antivirals (DAAs) for the treatment of hepatitis C were launched worldwide. New treatment regimens - combining DAAs and interferon-free - are now being prescribed. They have shown to cure over 90% of people with HCV, often in 12 weeks, with limited side-effects. Thus, they revolutionized hepatitis C treatment. Prospects of an HCV-free world have never been so attainable in our lifetimes. Unfortunately, the price of new regimens remains the main barrier to access for a vast majority of people with HCV around the world.

The key highlights from Dying at these prices: Generic HCV cure denied:

According to data collected in mapCrowd, 14 out of 17 countries in Western Europe set up treatment restrictions for people with HCV within their territory. Most of the time, DAAs are limited to those exhibiting the most severe conditions. These restrictive policies are mainly due to high prices charged for treatments: DAA combinations’ prices range from US$25,000 to US$75,000. As a consequence, none of the countries allow general practitioners to prescribe DAAs, which was generally the practice for previous treatment with pegylated-interferon.

On the other side of the Atlantic, the United States adopted rationing policies, while HCV is shown to be killing more people than any other infectious disease nationwide. DAA combinations are sold between US$54,600 and US$83,319 across the US, and coverage by insurance is erratic.

Using data collected in mapCrowd, the case for generics’ effects on treatment prices is demonstrated once again. Out of 13 countries, we can establish an average price for branded sofosbuvir (Gilead’s Sovaldi®) at US$38,154 when no generic competition exists. By comparison, the mean price for the same branded sofosbuvir sets at US$2,023 in 5 countries where generics are also available on the market. Beyond this reducing effect on the prices of branded drugs, generics are also a viable alternative for people with HCV to access life-saving treatment. The average price for generic versions of sofosbuvir is US$921, while the generic version of daclatasvir drops to US$241.

As these prices are continuously decreasing where generic competition is effective, the best prices might be still ahead, as the «Rapidly falling costs for new hepatitis C DAAs: Potential for universal access fair price» study (led by Dr. Andrew Hill) EXECUTIVE SUMMARY 4 powerfully demonstrates. They recently updated their lowest projected cost of production and retail price for sofosbuvir and daclatasvir generic versions to US$62 and US$14, respectively.

Generics can be introduced on the market using legal tools, such as compulsory licenses and patent oppositions. Moreover, generics’ safety and efficacy is already being documented, revealing performances similar to branded versions of the treatment course. With all these tools at decision-makers’ disposal, there should be no time wasted before engaging meaningfully with programs to eliminate HCV infection.

Treatment uptake: Political will knocked off course by drug pricing

Targets discussed by the international community toward HCV elimination are still far from reach. In mapCrowd countries with data available, treatment uptake in 2015 ranges from 0.13% (Malaysia) to 8.4% (the United States). The highly anticipated treatments scale-up, following the DAA therapeutic revolution, is evidently slower than expected. Treatment access dynamics, deeply intertwined with drug pricing, depend on the ability of States and health authorities, alongside civil society, to set up aggressive drug pricing strategies to widen the number of persons treated. Between 2013 and 2015, Pakistan, for example, achieved similar treatment uptake progression as France, which was once considered leading in the field of HCV treatment access worldwide.

While people who inject drugs face the highest burden for HCV infection, they are more frequently excluded from prevention and treatment. Stigma and criminalization act as powerful restrictions to access life-saving care and treatments. Preliminary results from a project implemented with Médecins du Monde in Georgia show promising outcomes. In a peer-support intervention — designed to facilitate the access of people who inject drugs to a national HCV elimination program — 98.8% of participants completed treatment with very good adherence. So far, the cohort reached a 90.1% cure rate with an undetectable viral load at week 12 after treatment. Similar programs using harm reduction approaches can continually make an impact in curbing HCV rates.