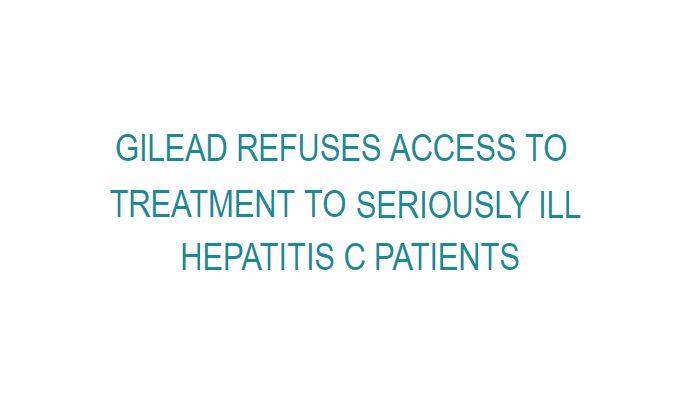 People living with HCV who are in an urgent need of new treatments should get an early access to compounds that are in nearing approval, and therefore not yet on the market. In France, there is an early access system, called ATU (Temporary Authorization of Use), to allow for early access to potentially life-saving drugs.

The French national regulation agency ANSM (Agence Nationale de Sécurité du Médicament) has granted many name-based temporary authorizations of use (ATU) for sofosbuvir, a compound from Gilead that is nearing approval, for transplanted people, people awaiting a liver transplant and cirrhotic patients with no other treatment options since the drug appears to be safe and effective for these populations.

But Gilead has refused to provide sofosbuvir to some of the people with the most urgent need : patients with late-stage cirrhosis (Child-Pugh B or C).

For their refusal, Gilead argued that it would be unfair to provide access only to patients in France. We do not accept this reason.

It is cruel to withhold potentially life-saving treatment from the patients who meet the clinical criteria for being most likely to benefit from it, or die without it.

In addition, Gilead has much to gain by providing sofosbuvir through early access programs. Scientific data can be collected in patients with the most urgent need, who are also likely to be the first to receive the drug when it will be approved. Data from early access programs can be used to determine the safest and most effective way to treat HCV in people who need it most. For example, the CUPIC study (French ANRS) provided critical information on which cirrhotic patients were most likely to benefit—or be harmed by —boceprevir or telaprevir-based regimens.

If Gilead refuses to study sofosbuvir in « real life » cohorts, the opportunity to minimize harm and maximize benefits is lost.

Therefore, we ask Gilead to provide sofosbuvir NOW, for the people with urgent need, including patients with late-stage cirrhosis (Child-Pugh B or C), among whom people living with HIV or other illnesses.