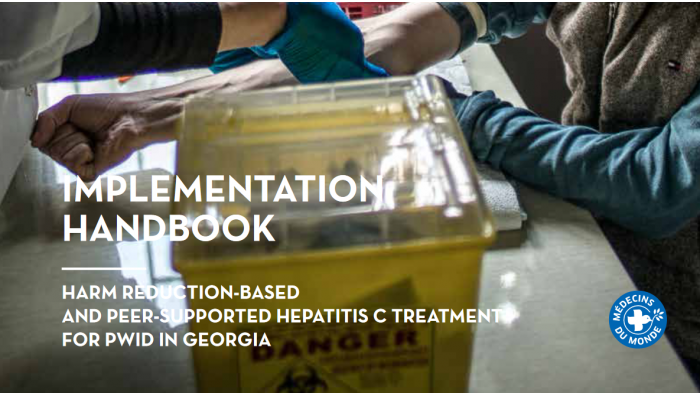 Georgia has a huge burden of hepatitis C, with a national prevalence rate of 7.1% for HCV antibodies. People who inject drugs (PWID) are particularly affected and hence form a vulnerable group. A study conducted by Médecins du Monde in 2012 found that 92% of the PWID in Tbilissi had HCV antibodies, 82% of them living with chronic infection, with 20% having advanced stage liver disease. PWIDs in Georgia, don’t have fair access to health services, with them being often marginalized on the basis of drug use and possession high criminalization, social isolation, stigma and medical staff misconceptions about PWIDs low treatment adherence and high risk of reinfection.

Since 2015 Médecins du Monde, New Vector (a Georgian self-support organization of PWID) and the medical center Neolab, have developed and implemented a pilot harm reduction-based and peer-supported hepatitis C treatment program. This intervention has been piloted into the National HCV Elimination Plan framework. The model has proven its efficacy in terms of increased uptake in screening and completion of treatment. Out of the 244 people who were enrolled into the program in 2015, 98% completed the treatment and 88.7% were cured. Enrolment in the treatment program also resulted in improved HCV knowledge among patients and safer reported drug use practices. Initially implemented only in the capital Tbilisi, it has now been replicated in another city of Georgia.

An Implementation handbook has been created, which describes this intervention and further shares as to how the model could be scaled up in other regions of Georgia or countries with a similar situation to Georgia in terms of HCV and national policies. The document offers basic operational guidance and tools to program planners and implementers of governmental and non-governmental organizations. However, replication of this project in other settings will require an assessment of the local context and careful consideration of key stakeholders, including the program’s beneficiaries – PWID.

The implementation handbook can be downloaded here in English and in Georgian: