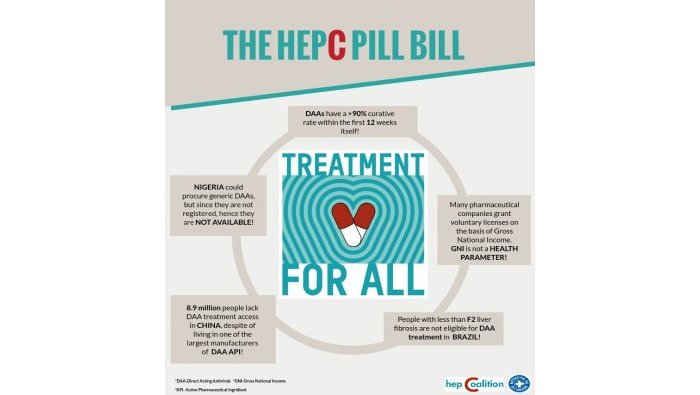 Hepatitis C treatment has remarkably evolved over the years. The previously known standard HCV regimen consisted of a course of pegylated interferon injections and ribavirin tablets, which all in all were expensive, toxic, and needed 24 to 28 weeks to act. With the advent of new Direct-Acting Antivirals (DAAs) in 2011, HCV regimens changed significantly. Sofosbuvir became the first drug to be approved for the new generation HCV treatment. DAAs have an edge over the previous medications, in the aspects of, being better tolerated and being more efficient in a shorter duration (90% cure rates after the first 12 weeks of treatment).

DAAs being highly safe and secure are unfortunately not available to all. The WHO estimates that just over 1 million people were effectively treated in 2016 in low- and middle-income countries, with more than half of them in Egypt alone.

Patented DAAs are those where the originator pharmaceutical company holds the exclusive right to sell the particular medication - this monopoly situation allowing them to do so at their own terms and conditions. Some companies adjust their pricing policies on basis of parameters such as Gross Domestic Product, which does not reflect whether people have access to medicine. This differential pricing policies has led to complex availability patterns across the globe. Paying for patented DAAs can present a huge ethical and financial implications for national health care systems and patients. Due to such constraints, in most countries, the treatment is limited to a certain group of the population or certain pre- agreed staging schemes of disease. Hence this puts the lives of many people at stake. Access to generic versions of DAAs, which cost as little as US$ 20 for 3 weeks, is therefore critical to ensure universal access to HCV cure.

The World Trade Organization (WTO) Trade-Related Aspects of Intellectual Property Rights (TRIPS) Agreement, which contains international standard rules related to patents, clearly mentions that there is sufficient room for countries to restrict patent rights, especially when they pose major public health problem. Patent rights are territorial and only apply to the national territory once granted, national patent offices are in charge of granting or rejecting patent applications. Civil society and generic manufacturers can support rejection of an application - or invalidation of a patent - by filing patent opposition demonstrating that it does not fulfil patentability criteria. Even if a patent is granted, TRIPS Agreement allows countries to commission local manufacturers or import generic versions of patented DAAs under certain conditions, under the niche of Compulsory Licenses.

Mostly, the affordability and accessibility of a drug, determines the quality of care of a certain disease and furthermore also determines the formation of clinical guidelines. HCV treatment is restricted to those who have an advanced stage of liver disease in many countries. Brazil for example is an upper middle income country and has national guidelines stating that only HCV patients with F2 level or above of fibrosis are eligible for DAAs prescription. Hepatitis C is known to progress from acute form to the chronic form and hence cause Liver cirrhosis and Hepatocellular Carcinoma. The question is, is it fair to treat an advanced stage of disease instead of treating the disease in infancy? These restrictions in the clinical guidelines have vertically transcended from budgetary restrictions. Brazil was excluded from voluntary licenses and hence had limited access to treatment. Civil society in Brazil has recently opposed a key patent on Sofosbuvir leading to its rejection. This recent development could enable price reductions and treatment being available for the over 1.8 million people currently left behind by the restriction criteria.