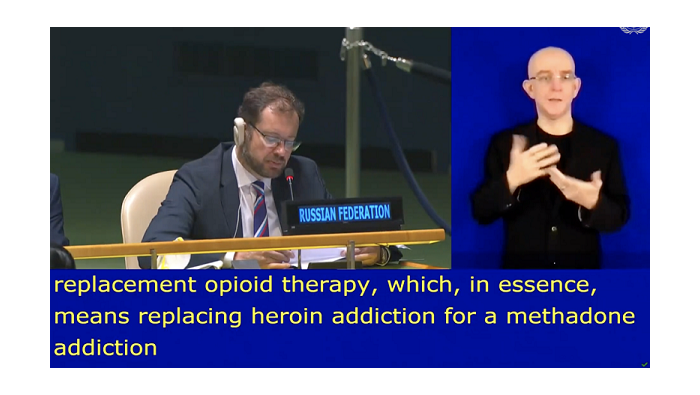 Russia stunned the United Nations High-Level Meeting on AIDS on Tuesday (June 8) when it proposed a series of last-minute oral amendments to the meeting’s final political declaration – removing references to “rights”; the decriminalization of sex work; and harm reduction in the context of the battle against HIV/AIDS.

The text of the final declaration had been negotiated over the past two months under the leadership of Australia’s Mich Fifield and Namibia’s Neville Gertze, and Gertze told the meeting that 73 changes had already been made to accommodate Russia’s concerns.

The declaration text was finally adopted, not by consensus but by a vote, after the vast majority of delegates rejected further last-minute amendments proposed by Russia at the meeting. The declaration was approved by 162 countries voting in favour and four against, with Belarus, Nicaragua and Syria siding with Russia.

However, after the vote, a number of countries that supported the declaration also made it clear that their support was qualified. Countries including Bahrain, Egypt and Libya disassociated themselves in particular from references to “key populations” – those groups considered particularly vulnerable to HIV, including sex workers, men who have sex with men and injecting drug users.

They described such groups as being against their culture, while Russia described them as an affront to “family values”.

Meanwhile, a number of African countries including South Africa, Rwanda and Cameroon expressed disappointment that the declaration, which is meant to guide the next stages of the global campaign against HIV, had not been adopted by consensus at the High Level meeting. Declaration ‘Does Not Measure Up’

However, the US was the most direct in its condemnation of Russia’s “new and hostile amendments” – as well as the compromises that had been made to get to the current declaration.

“The political declaration before us, put simply, does not measure up,” said the US delegate.

What started as a “strong, ambitious declaration” that was evidence- and science-based, has become a text that “lacks the ambition needed to meet the stated goals of this High-Level Meeting: ending inequalities and ending AIDS”, she said.

The main issue the US had with the declaration was how “national sovereignty” had been given prominence, enabling countries an escape from implementing various clauses because of “national context”.

“Comprehensive sexuality education, and the recognition of sexual orientation and gender identity are central to an effective HIV/ AIDS response,” stressed the US delegate.

“HIV prevention and treatment programmes that do not recognise the diversity of populations and their unique needs will not successfully stop HIV infection or ensure that all persons living with HIV AIDS have access to treatment.”

Delegates from the US, Canada and Portugal (on behalf of the European Union) also condemned Russia’s approach which scuppered weeks of sensitive negotiations.

Research findings, such as a study published just this week also underline the importance of sensitivity to sexual orientation and gender identity in the battle against HIV/AIDS. The study, led by Matthew Kavanagh, of the Global Health Policy and Politics Initiative at Georgetown University, found that countries that criminalise same-sex relationships, illicit drug use, and sex work have worse outcomes against HIV.

Kavanagh’s research found that “in countries with criminalised legal environments, a smaller portion of people living with HIV knew their HIV status and had suppressed virus compared to countries with less criminalising laws”.

The clauses that particularly offended Russia included those related to “key populations”, harm reduction; and reference to a “rights-based” approach in combatting HIV/AIDS.

In particular, Russia had wanted to drop a clause that committed the global community to “urgent and transformative action to end the social, economic, racial and gender inequalities, restrictive and discriminatory laws, policies and practices, stigma and multiple and intersecting forms of discrimination, including based on HIV status, and human rights violations that perpetuate the global AIDS epidemic”.

In addition, Clause 28, was also viewed as unacceptable by Moscow. This expresses “deep concern about stigma, discrimination, violence, and restrictive and discriminatory laws and practices that target people living with, at risk of and affected by HIV”.

Clause 37 on countries’ lack of progress on “expanding harm reduction programmes” was also earmarked for deletion.

In addition, Russia sought to delete language committing countries to “eliminating HIV-related stigma and discrimination, and to respecting, protecting and fulfilling the human rights of people living with, at risk of and affected by HIV” and “reviewing and reforming restrictive legal and policy framework” that create barriers or reinforce stigma and discrimination was also unacceptable (Clause 65 A and B).

AIDS is Not Over, Says UNAIDS Head

UNAIDS Executive Director Winnie Byanyima, told the opening plenary: “AIDS is not over. It is one of the deadliest pandemics of modern times. Since the start of the pandemic, 77 and a half million people have been infected with HIV globally and we have lost nearly 35 million people to AIDS. An AIDS death every minute is an emergency.”

A number of countries have made good progress to eliminate new cases by 2030 – a goal set at the last UN High Level Meeting in 2016 – but the COVID-19 pandemic had undermined progress, she added.

“The evidence shows that when laws are strengthened to support gender equality, the rights of key populations and confront stigmatisation, countries have made greater progress in treatment and prevention programmes benefiting everyone,” added Byanyima. “We need to keep moving forward in our common journey away from harmful punitive, outdated, often colonial laws and from all forms of discrimination.”

Yana Panfilova, a 23-year-old woman who was born with HIV and is a member of GNP+ Global Network of People Living with HIV, also addressed the plenary.

“The AIDS response is still leaving millions behind: LGBTQ people, sex workers, people who use drugs, migrants and prisoners, teenagers, young people, women and children who also deserve an ordinary life with the same rights and dignity enjoyed the most people in this room,” said Panfilova.

“If we’re going to make a real change, these four things must become a reality. First one, comprehensive sexuality education in all schools in all countries. Second, psychological support, and peer support for every adolescent living with HIV and young key populations.

Third, the community needs HIV services to become the reality, not the exception. And the last one, finally, get an HIV vaccine.”