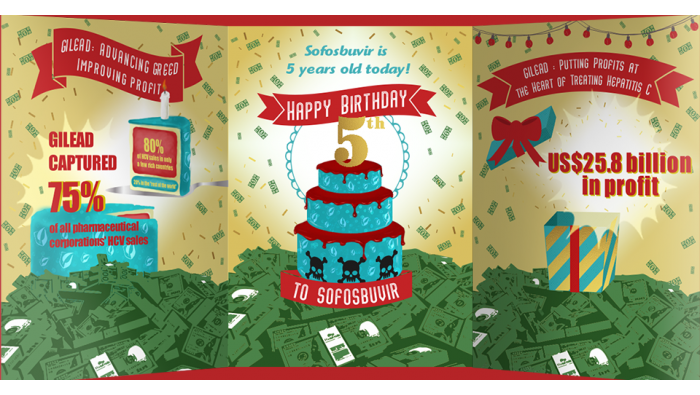 Advocates scandalized that Gilead’s hepatitis C profits have raked in US$25.8 billion, which could have treated everyone while still earning US$16 billion in profits.

6 December 2018, Paris, France, New York, NY— People living with hepatitis C, access to medicines activists, and the medical community around the world “mark” the fifth birthday of the first all-oral, one dose per day cure sofosbuvir (Sovaldi®), launched by Gilead Sciences. A global hepatitis C coalition has released a fact sheet revealing treatment barriers that resulted in only 1.85 million of the 71 million people worldwide who need treatment, receiving Gilead’s sofosbuvir-based drugs, largely due to pricing, patents, and registration delays.

Since 2013, Gilead reaped US$58.6 billion in hepatitis C product sales, of which US$25.8 billion are estimated profits [1], with a fraction of these earnings invested in research and development. Instead, in 2017 alone, Gilead spent US$14.8 billion rewarding shareholders. This amount is more than sufficient to treat everyone with chronic hepatitis C with generic versions.

“The mind-boggling profits that Gilead earned since the launch of sofosbuvir could treat every person currently waiting for the hepatitis C cure while earning over US$16 billion in profits for shareholders. This is a massive transfer of wealth from public health systems and sick individuals to a handful of pharma executives and shareholders,” said Annette Gaudino, HIV/HCV Project Director, Treatment Action Group.

The breakthrough direct-acting antivirals (DAAs) can cure over 90% of people with chronic hepatitis C, and generic versions show similar safety and efficacy rates as brand drugs. Generic competition to accelerate the number of people who start treatment is stalled due to Gilead’s and its sub-licensees’ delay or failure to register their drugs, blocking access to the cure in countries with some of the highest rates of hepatitis C.

“In Malaysia, even though we fall under the voluntary license, the uncertainty of marketing approval by drug regulators was a possible delay in accessing affordable sofosbuvir. Instead, it was important to use a compulsory license to fully guarantee affordable treatment for people with hep C," said Edward Low, Director, Positive Malaysian Treatment Access & Advocacy Group.

In addition, treatment activists investigate and challenge the merit of Gilead’s patent on sofosbuvir and sofosbuvir-based treatment combinations. Following several high-profile patent challenges in Brazil, India, and the Ukraine, a coalition of European civil society organizations and patient groups [2] have recently appealed against the decision by the European Patent Office for rejecting their opposition to the patent granted to Gilead for sofosbuvir.

“Unmerited patents in Europe are giving pharmaceutical corporations the monopoly power that allows them to charge exorbitant prices for many lifesaving drugs,” said Gaëlle Krikorian, Head of Policy at MSF’s Access Campaign. “The excessive prices Gilead is charging for sofosbuvir have kept this breakthrough medicine away from millions of people with hepatitis C – in Europe and around the world. What is the point of medical innovation if people and health systems cannot afford the products coming out of it?”

Sofosbuvir’s fifth birthday is a reminder of how Gilead privatized publicly funded research. In 2011, Gilead acquired Pharmasset, the original developer of sofosbuvir, which relied on US$880 million in public funding by the National Institutes of Health. Gilead then priced a 12-week treatment course of sofosbuvir at US$84,000 versus the estimated US$42 it costs to manufacture generic sofosbuvir, including a 10% profit margin and a 27% tax on the profit margin.

“It is scandalous that five years on we have not had the enormous impact that we should with the first safe, highly tolerable cure,” said Olivier Maguet, Drug pricing and health systems campaign responsible at Médecins du Monde. “An estimated 5 million people need to be treated each year to curb the epidemic—without addressing the pricing barriers, delays in registration, and limited generic competition the hepatitis C cure will be a failure in medical history and for humanity.”

[1] Gilead’s profit margin was calculated with the ratio net incomes attributable to Gilead divided by the total revenues per year and applied to HCV products sales per year, yearly figures are coming from Gilead’s annual earning reports.